In October, 1983, Cessna announced that they would be improving the Citation II Model 550, and the upgraded Model S550 Citation S/II first flew February 14, 1984. The S/II could seat a maximum of 11 people. The aircraft utilized an improved version of the engine, JT15D-4B (2,500 lbf (11 kN) of thrust). The "B" in the engine model number consists of components in the hot section being replaced with components sustaining higher IT temperatures which in turn allows for a higher N1 percentage of 106%, a full 2% more than the JT15D-4 engines installed on the Citation II. The main benefit of the percent increase provided more thrust at higher altitudes. Fuel capacity was increased to a total of 5820 lbs. The rest of the improvements were aerodynamic in nature. The wing was replaced with one using a supercritical airfoil, which had been developed for the Citation III. The leading edges of the wing and tail used TKS type anti-icing fluid in addition to bleed air used for the engines. Once certification was in hand, the S/II replaced the II in the product line in late 1984.

NEW ON THE MARKET! This 1987 Citation S/II (Model S550) has just recently put on the market. With only 10,496.8 Airframe Hours this beauty won't last long. You can checkout the spec sheet by clicking the link provided. Download Spec Sheet

For more information about this aircraft please call at (561) 686-7944 or email us at This email address is being protected from spambots. You need JavaScript enabled to view it.. 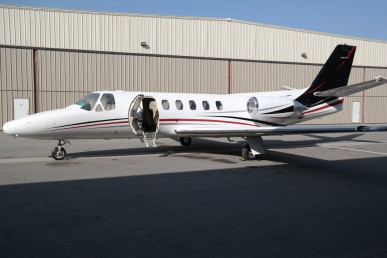